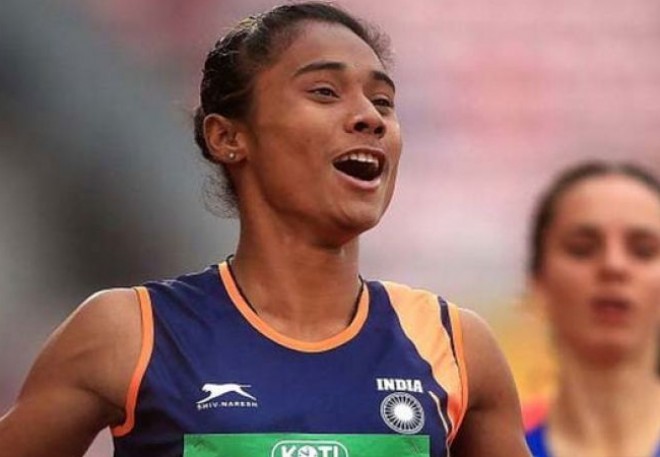 Hima Das is receiving greetings from all over the country for winning the 5th gold medal in the last 18 days. The star-studded tweet was greeted by President Ram Nath Kovind, PM Modi and Sachin Tendulkar for her outstanding performance. Hima finished first in the women's 400 metre event at the Nove Mesto Nad Metuji Grand Prix in the Czech Republic.

Three weeks, five gold medals!
You're incredible @HimaDas8 Keep sprinting, keep shining and may this success set the pace for glory at the 2020 Olympic Games #PresidentKovind

Prime Minister Modi congratulated Hima on Twitter, saying, "India is very proud of @HimaDas8s phenomenal achievements over the last few days. Everyone is absolutely delighted that she has brought home five medals in various tournaments. Congratulations to her and best wishes for her future endeavours.

This is Hima's fifth gold medal this month. She has previously won gold in different events at the Kunto Athletics Meet in Europe on July 2, the Czech Republic on July 13 and the Tabor Grand Prix on July 17. Legendary batsman Sachin Tendulkar also praised Hima's performance and wrote, "In the past 19 days, you have been running in the European circuit. He is very awesome. Your hunger for victory and stubbornness is an inspiration for the youth. Congratulations for winning 5 medals. Congratulations Hima Das for the upcoming races in the future. '