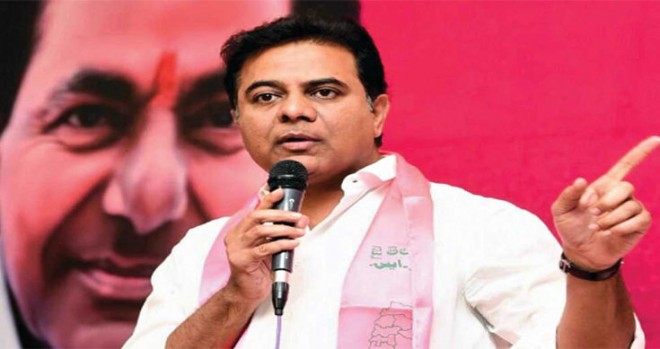 "Why are Naidu and Lokesh raising an outcry if they did not commit any wrong? Why did they send AP police to Hyderabad to obstruct investigation by TS police? What AP police has to do in Telangana?

Naidu and Lokesh's frustration shows they allowed IT Grids Company to steal the AP people's data. If they did not commit any wrong, they should cooperate TS police in investigation and come out clean. Where is the need to approach courts and raise a protest on this issue?" KTR asked.

KTR said Naidu is trying to provoke "Andhra sentiment" in AP using data theft case with a bad faith intention to benefit in Assembly polls but he should realise that AP people are not innocent to believe his cunning dramas.

"I leave it to the wisdom of AP people to decide whether they want a cunning CM like Naidu to continue who allows a private company to steal the public's confidential data for TDP's political gains. As a government head, he should protect public data but in reality he is allowing thieves to loot the data," KTR remarked.

KTR ridiculed TDP leaders demand of transferring this case to AP. "Who will transfer the case to a thief? Is there any logic in this demand? When they themselves are thieves who stole the data, how could they investigate this case in a fair and transparent manner, if this case is transferred to AP.

The headquarters of this firm is located in Hyderabad. The crime was committed here. TS police should investigate as per law. What AP people has to do in Telangana. Hyderabad is not a common capital for AP to commit crimes in city and go away scot-free by doing petty politics," KTR said.