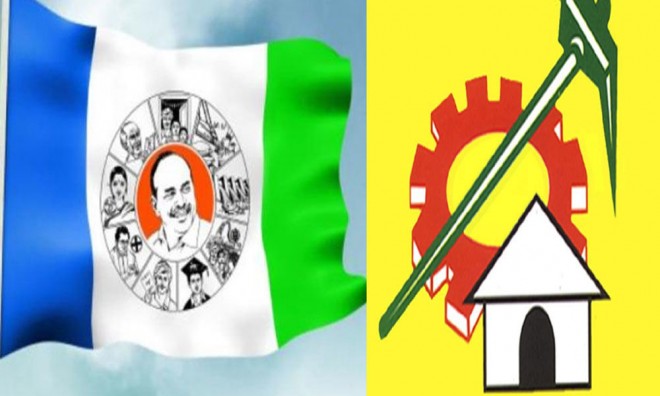 It has been 4 days since the high voltage elections to the Andhra Pradesh state assembly were held, but there seems to be no stoppage in the violence between the Telugu Desam Party and YSR Congress party in different parts of the state.

According to the latest information, a tense atmosphere prevailed in Nellore town on Monday after TDP workers staged sit-in dharna in front of YSRCP Rural MLA and present contestant Kotamreddy Sridhar Reddy's office.

They alleged that Kotamreddy supporters have attacked TDP leader Tirumala Naidu by following his car and also damaged the vehicle.

They complained to police that YSRCP workers under the directions of their leader Kotamreddy have made an attempt on the life of Tirumala Naidu.

Both the groups indulged in scuffling and police who were present tried to stop them. Later, they lathi-charged both the warring groups. The police took a few workers into custody.

In the last two days, similar reports of clashes were coming from other parts of the state like Srikakulam, Vizianagaram, East Godavari, Chittoor and Anantapur.

Since the verdict of the people is sealed in the electronic voting machines, neither party would be able to influence anybody with such clashes.