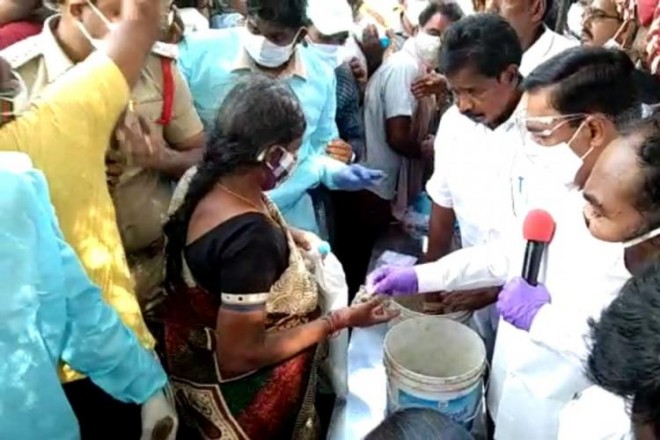 Nearly a week after the state government gave its nod for the herbal formulation, Anandaiah and his family members started distributing the concoction in Krishnapatnam.

People from various parts reached Krishnapatnam to receive the medicine. Long queues of people waiting to get the formulation were seen.

Anandaiah told reporters that initially the medicine was being distributed among people in Sarvepalli constituency. He said efforts were being made to ensure that every household in the constituency got the medicine.

He appealed to people of other constituencies not to come to Krishnapatnam for the medicine and wait for the announcement about distribution in their respective areas.

Distribution of the medicine was stopped on May 21 as it had led to massive overcrowding at the venue in Krishnapatnam.

The state government, on May 30, permitted the usage of the herbal preparation by taking into account the findings of the Central Council for Research in Ayurvedic Sciences.

The government, however, kept on hold its decision on the eye drops claimed to be life saving for those with dangerously low levels of oxygen.

While giving the permission for the herbal preparation, the state health authorities warned that Covid patients should not stop taking the drugs prescribed by doctors in the normal course.

The government also stated that it is was yet to receive a conclusive proof of the efficacy of the eye drops, while it had been established that the concoction of ingredients such as honey, pepper, green camphor, nutmeg, black cumin, cinnamon, and medicinal herbs was not harmful, but may not be able to cure the coronavirus infection.

Anandaiah, who claims to be a practitioner of ayurveda for over 30 years, says that the traditional medicines given by him are useful in treating not only Covid, but also various other infections.

Nellore district officials, however, found that Anandaiah was not a qualified professional in ayurvedic medicine and the formula narrated by him did not form part of any standard recipe.