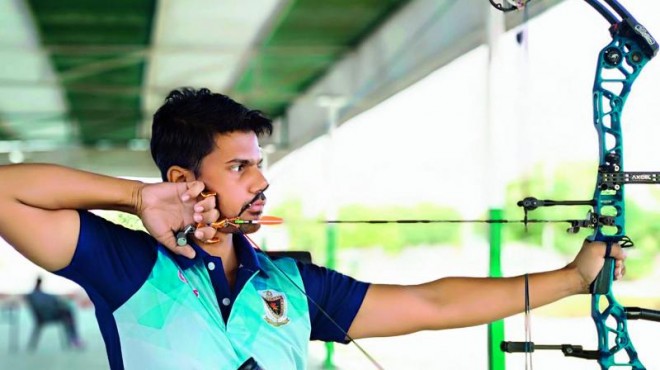 Sunendu Roy from Kolkata, who has been consistently ranked among the top 10 archers in the country for the last three years, has his eyes firmly set on the target.

He wants an Olympic medal, and nothing else would satisfy Roy. He works in the telecom section of the Indian Railways, and is based at Vijayawada. Being in Vijayawada makes it easy for him to practise at the Volga Archery Academy.

Roy was by the Kolkata Sports Authorities of India to Vijayawada in 2009 after the Academy founder late Cherukuri Lenin noticed the talent in him. Since then, Roy has won several medals.

Roy has also won 90 meters individual championship in All India Inter University Archery Championship in Patiala in 2011, and the bronze in team event held in 2008 31st Junior National Championship.

Roy told this correspondent, "I would like to bag medals in World Championship and Asian championship, representing Andhra Pradesh."

He said that an Olympic medal would be Guru Dakshina for his guru Lenin who supported him when no one else would and he was on the verge of losing confidence in himself.