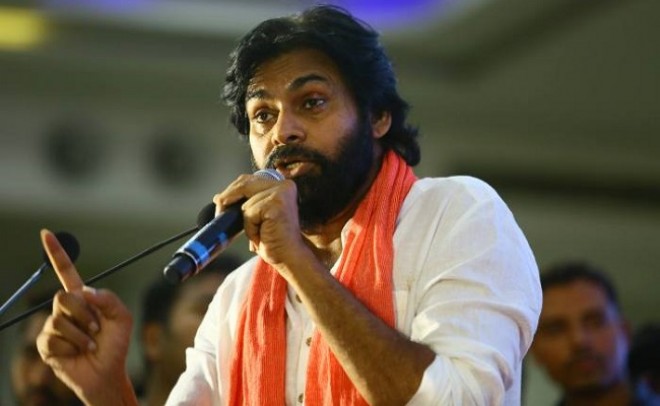 Amaravati, Apr 10: Power star and Jana Sena Party chief Pawan Kalyan seems to have almost given up hope to make an impact in the ongoing elections in Andhra Pradesh, but he strongly desires that YSR Congress party headed by Y S Jagan should not come to power at all.

This was evident from his interview to a channel, in which he said there was no question of Jagan coming to power in the state.

"No, Jagan can never become the chief minister. YSRC is going to lose the elections this time," he said, when asked whether Jagan will be the next chief minister of Andhra Pradesh.

Why does Pawan feel so? Well, he has an answer. He says whatever Telangana chief minster K Chandrasekhar Rao predicted with regard to Jagan, it proved otherwise.

"In 2014, too, KCR had predicted that Jagan will come to power in AP, saying he had the lucky hand. But the results were different. This time, too, KCR is supporting Jagan and is predicting that he would become the chief minister. So, it will not happen," he said.

Pawan said people would not vote for Jagan for the simple reason that he is being supported by KCR, who abused and insulted Andhra people in the past.

"KCR might be right with regard to Telangana, but he proved wrong in Andhra," he said, adding that Yadadri Narasimha Swamy or Goddess Chandi will not accept this.

Another reasoning given by Pawan for Jagan's probable loss is that the YSRC president had desecrated Tirumala temple by allegedly going into the temple with chappals.

"Such a person who walks into Tirumala with chappals will not become chief minister forever," he said.

Pawan wondered whether Jagan would go to Vatican church in the same manner and asked whether the Telangana chief minister would permit Jagan to enter Yadadri temple with chappals.