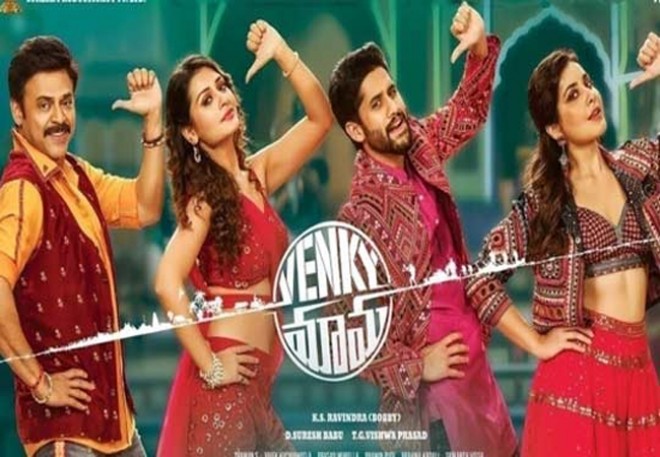 Venky Mama, the most eagerly awaited multi-starrer featuring Venkatesh and Naga Chaitanya has been carrying good buzz among the audience. Directed by Bobby, the film has hit the screens today. Let's analysis it.

After the death of Karthik's(Chaitanya) parents at a very young age, his uncle Venkat Ratnam (Venky) dedicates his life to Karthik without any deviations. Later, due to some unavoidable reasons, Karthik joins the Indian Army without any prior intimation to his uncle. The conflict point in the tale arises when Karthik goes missing for a brief period at the Army camp. What will Venky do at the course of time? Will he go against all odds and identify his nephew? Will they both reunion again? Forms the rest of the story.

Undoubtedly, Venkatesh is the show-stealer. The senior hero once again shines in the role with is blended with the right mix of emotions and humor. He acted so naturally in the village head role and at the same time showcased good performance as an emotional person. Naga Chaitanya is decent in his role as a lover boy and a matured Army captain. All his scenes with Venky have come out well.

Both the heroines Raashi Khanna and Payal Rajput are gorgeous on the screen are apt in the given roles. Other artists like Rao Ramesh, Prakash Raj are okay in their purposeful roles.

Coming to the direction, director Bobby has come up with a family subject which has good emotional content but he struggled to narrate it with an engaging screenplay. Though the fun scenes in the first half and a few family episodes have come out well, somewhere the connection and flow are missing in the proceedings.

A few fun scenes in the first half

All in all, Venky Mama is a family entertainer that holds the ground at times. Venky's screen presence and scenes between Venky-Chay are a treat to watch for the fans but lack of proper depth in the narration makes the film an okay watch.