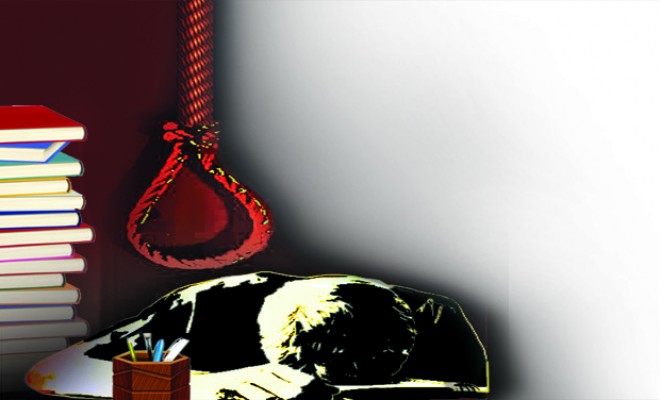 Hyderabad, Apr 25: Two more intermediate students in Telangana on Wednesday committed suicide, taking the number to 10 since the results were declared last week, even as protests continued over the Telangana Board of Intermediate Education (TBIE) goof-ups.

Depressed over failure in examinations, Chakali Raju hanged himself in his house in Chinna Shakarampet village of the Medak district. Another student Malothu Naveen of the Warangal Rural district ended his life by jumping before a train.

With these two suicides, the number of students who ended their lives increased to 10 since April 18 when the TBIE declared results for intermediate first and second year (11th and 12th standard) examinations.

While admitting lapses in declaring results, the authorities have denied that the suicides were related to this. They said efforts were being made to address the students' grievances. Education Minister Jagdish Reddy alleged that the opposition parties were trying to politicise the issue.

The TBIE bungling has come under criticism from all quarters as it shocked many students and their parents. Many students who had passed the first year with distinction failed in the second year. In a rude shock for them, they were awarded zero, one or two marks in each subject.

Meanwhile, protests by the student groups continued for third day over the TBIE fiasco.

Activists of the Students Federation of India (SFI) tried to lay siege to Chief Minister K. Chandrashekhar Rao's residence. Police arrested dozens of protesters who were raising slogans against the government and demanding action against those responsible for goof-ups.

Students groups also staged protest at the TIBE office. Senior Congress leader V. Hanumantha Rao was arrested when he reached there to show solidarity with protesting students and parents.

About 900,000 students had appeared in the intermediate examinations in February-March. The pass percentage was just above 60.

The Telangana High Court on Tuesday heard a petition filed by an NGO fighting for children's rights, seeking free re-valuation of all answer sheets. It asked the government to inform it by next week about the time required for re-valuation of answer sheets of students who have failed in the examinations.