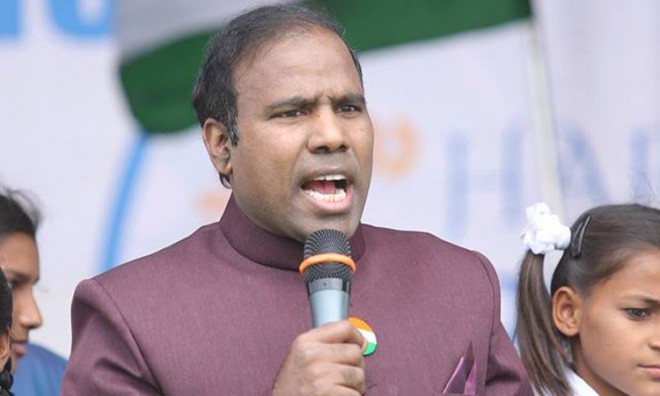 Telugu Desam Party president and Andhra Pradesh chief minister N Chandrababu Naidu is making a hue and cry over malfunctioning of electronic voting machines, allegedly to find excuses for his forthcoming defeat in the just concluded assembly elections in the state.

Now, he is joined by yet another leader with the same allegation. He is maverick evangelist-turned-politician and Praja Shanti Party chief KA Paul.

Even as Naidu was trying to mobilise the support from as many as 22 parties in his fight against EVMs and for counting of slips from at least 50 per cent of VVPAT machines, Paul also went to New Delhi on Monday with the same demand, so that he did not want to lag behind Naidu to cover up his defeat in the elections.

Echoing Naidu's demand, Paul also pointed out that there was every possibility of tampering EVMs. He alleged that the BJP was making all out efforts to bring YSR Congress party to victory in Andhra Pradesh since YSRC would be a weak partner.

He suggested that all the parties should boycott the elections if there was no solution to the problems of electronic voting machines.

He alleged that EVMs did not function in at least 40 polling stations in Narasapuram constituency on the day of polling and said he was going to complain about this issue to EC. He expressed concern over present situation in the country as well as the state and no party is having time to address this issue.

He said that only Kapil Sibal responded to his words. He claimed that Chandrababu Naidu, Mamata Banerjee, Naveen Patnaik, Stalin and Akhilesh Yadav were also calling him to take his suggestions.

Paul warned that Prime Minister Narendra Modi, if voted to power again, would destroy the country and wanted all the opposition parties to come together before May 23.