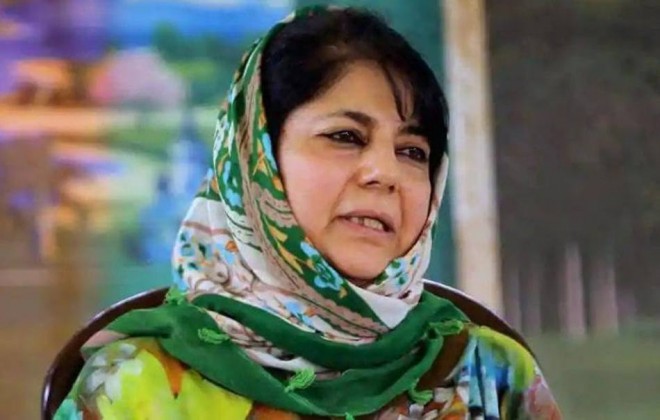 Former Jammu and Kashmir chief minister and People's Democratic Party (PDP) leader Mehbooba Mufti on Monday said that India may launch another Balakot type attack in Pakistan to misguide the people of the country and lure them to cast their votes in favour of the ruling party.

"There're apprehensions that the BJP-led government in a bid to save its sinking ship may launch another Balakot type attack against Pakistan," she said while speaking at party workers' convention in hometown Bijbebara in southern Anantnag district.

She alleged that the Modi government has failed on every front "with the masses perturbed, joblessness spiralling and economy witnessing a dreadful dip". She said, "The BJP tried its best to polarise the situation and instigate communal riots all across. When nothing worked, it enacted a drama called Balakot strike".

She claimed that during the very first phase of the ongoing Lok Sabha elections, the BJP has foreseen its defeat and in order to garner votes and hoodwink the electorate there are apprehensions that Modi-led government is preparing to launch one more Balakot type attack against Pakistan.

Mufti said that the government's ongoing antagonistic approach towards Pakistan and releasing terror upon the unarmed and innocent people of Kashmir are nothing but a vote bank politics of the BJP as the party is witnessing rout all across the country.

Reacting to the statements of West Bengal CM Mamata Banerjee and her Delhi counterpart Arvind Kejriwal in which apprehensions were raised over the authenticity of the Pulwama suicide attack, the PDP president demanded a thorough enquiry to ascertain the facts.