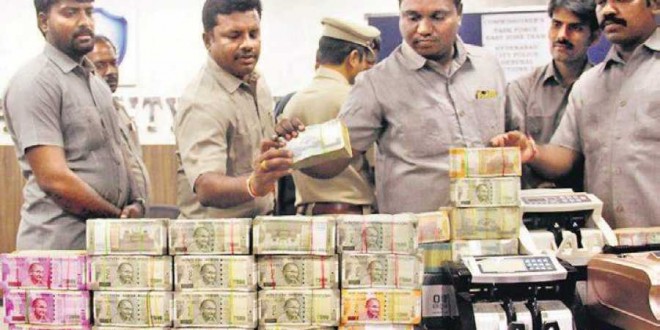 Hyderabad, Mar 13: About Rs 90 lakh cash was seized from different places in the city on Monday night during a vehicle check conducted at four places in Sultan Bazar and Kachiguda by the Task force police.

The police deflected the vehicles carrying cash and arrested 4 men who were identified as Devesh Kothari (43), Bhakti Prajapati (33), Khan Bilal Naseem (27) and Vishal Jain (24). The cops recovered Rs 50 lakh cash from Devesh who veiled it inside his jacket and Rs 23 lakh from Bhakti.

Later on, they came across other two accused Khan Bilal and Vishal Jain who caught transporting Rs 5.7 lakh cash and Rs 11.6 lakh commonly. As the accused unable to provide any documents relevant to the cash, they were arrested, said Hyderabad police commissioner Anjani Kumar. Reportedly, the cash was handed over to Income Tax officials.