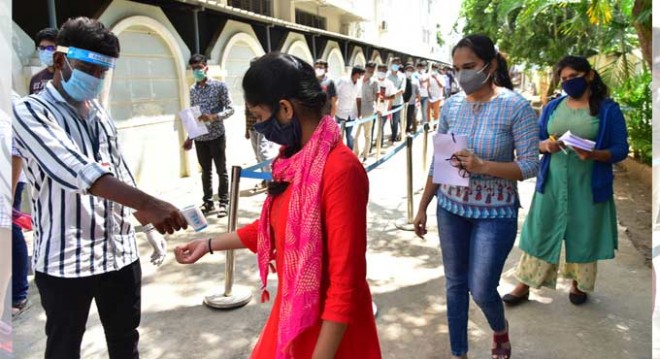 Hyderabad: Students from Telangana have shined in the results of the Joint Entrance Examination (Main) February session which was released on Monday.

A boy and girl, Challa Vishwanath and Komma Sharanya, were declared Telangana toppers in JEE Main results. Both have secured 99.9990421 National Testing Agency (NTA) score. In fact, Sharanya has topped the female category.

According to a press release issued by the NTA, six students have secured a 100 NTA score.

In the female category, two students from Telangana bagged two spots in the top three. Sharanya has topped the table, while Ancha Pranavi was at the third position with 99.994135 score.

Going by the category wise, in the ST category, Islavath Nithin with 99.9942523, Bijili Prachothan Varma with 99.9845137 and Nenavath Preetham with 99.9789252 NTA scores bagged first, second and third positions respectively. Likewise, in the Gen-EWS, Ancha Pranavi bagged third position and Ramaswamy Santhosh Reddy with 99.9921799 score was at the fourth position. In the OBC-NCL, with 99.981799 score Taviti Venkata Manikanta was at fifth position. All these students are from Telangana.