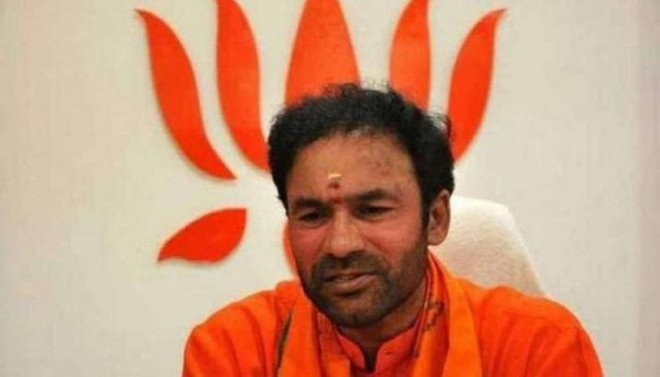 Union Minister of State for Home, G Kishan Reddy today accused the successive governments at centre and Jammu and Kashmir of neglecting Ladakh in the development sphere which has led to grave injustice with this region.

Addressing election meetings at Panamik, Summur, Hundar and Deskit in Nobra area today, he said fed up with this grave injustice there was simmering demand in the region that Ladakh be separated from erstwhile J and K state for its development and progress as the region faced abject neglect through the hands of the successive Governments at Delhi and J and K after independence.

He said to fulfill the demand of Ladakhis, Prime Minister, Narendra Modi bifurcated the erstwhile J and K state into two UTs in 2019 making Ladakh a separate UT independent of control from the J and K rulers so that due attention is paid to the holistic development of this region.

Reiterating the Modi Government's commitment to make a prosperous and developed Ladakh , Reddy said many steps were taken in this regard during last over one year. However, the process received some setback due to spread of Covid -19 pandemic which took entire world in its grip.

Though the Government was on move to take decisions for the rapid development of this region to fulfill the long drawn dreams of the people but the Covid during last nine months created impediments in this regard.

Kishan Reddy said Ladakh has the capacity of generating over 20,000 mw of solar energy and all steps are being taken to tap the same. Allaying the fears of the people of the UT, the Union minister said that Modi government is committed to develop this hilly and strategic region rapidly.

He said the Union government has sanctioned the Kargil -Zanaskar Highway and work on various roads has been undertaken by BRO. Besides, the work on Zojila Tunnel which is the longest 15 km tunnel in Asia has been started. With the construction of all weather tunnel, Ladakh will remain connected via Kashmir valley with the rest of country by road for all 12 months of the year, he
added.

Earlier, Ladakh remained cut off with the rest of the country for six months of Winter and the tunnel will not only keep the UT connected with other parts of country for the entire year but will also reduce the distance of travel from Leh to Srinagar to a great extent. This shows the commitment of the Modi Government towards the welfare of the people of this region, the Minister added.

Kishan Reddy said for the welfare of the employees of the region, 10 percent increase in their salaries has been made by the Government. While addressing these election meetings, he appealed the people to vote for the BJP candidates in October 22 LAHDC elections after due consideration.