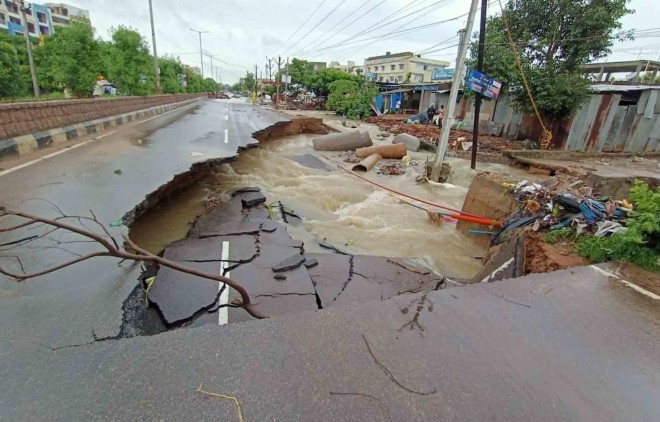 Incessant rains have taken the toll of Warangal city. The city is witnessing worst floods ever with almost all the residential colonies as well as main roads have been inundated with flood waters. Most of the water in residential colonies are not flowing out and are stagnant thus giving scope for newer problems! But why is Warangal facing such severe flood crisis?

Warangal has been identified to be converted into smart city by the central government. But this smart city is unable to face four days of continuous rains. More than 350 residential colonies in the city have been flooded with rain water, moreover the water is stagnant without flowing out. Many houses have been filled with water and thousands of people are living in the grip of fear without food!

The scene is very similar with main roads as well. All the main roads in the city have turned into canals with water gushing through them. People are unable to move in or out of their houses; thousands of vehicles are being washed away in the waters. Many roads have been cut off thus stopping movement of vehicles and people.

More than 9,500 people were shifted to 13 relief centres in the tri-cities of Warangal, Hanamkonda and Kazipet on Monday as low-lying areas were submerged by floodwaters. Three teams of the Disaster Response Force of Greater Hyderabad Municipal Corporation (GHMC) have taken up the required rescue and relief operations under the Greater Warangal Municipal Corporation (GWMC) limits.

Several business establishments along Hunter Road, Hanamkonda Bus Stand, 100 feet road, NTR Nagar, Gopalpur Nagar, Samaiah Nagar, Amaravathi Nagar, SBI Colony, Deendayal Nagar, Fort Warangal, and Waddepally Road were flooded. According to officials, as many as 320 houses were partially damaged due to the continuous rain in the rural areas under the district. The concerned mandal revenue officials are conducting surveys on the extent of damages on the houses, and the families have been accommodated in government shelters. Warangal Urban District Collector Rajiv Gandhi Hanumanthu inspected the low lying areas.

This kind of situation has emerged in Warangal city because of the real estate growth. Many small time political leaders and even local MLAs are involved in developing ventures encroaching lakes and canals that were the lifeline of Kakatiya Empire. Since over seven years Warangal is being promised by Chief Minister K Chandrashekar Rao and the entire council of ministers, who visited the city, that underground drainage system would be developed. But over 750 colonies are without underground drainage system thus leading to water flowing on to the roads and colonies.

Warangal was municipality, later was upgraded to municipal corporation and now further has been converted into greater municipal corporation. But unfortunately there has been no development to the extent of the name changes. According to Forum for Better Warangal, there are four main reasons for the city to get flooded with heavy rains: First, all the lakes and ponds in the city have been encroached. Second, the naala (canals) which were once around 100 feet have now been encroached and reduced to less than 30 feet. Thirdly, there is no proper drainage system. Fourth, there is no underground drainage system available.