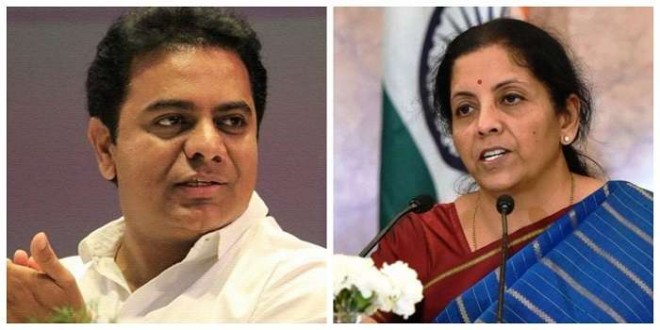 IT and municipal administration minister K.T. Rama Rao is leading a counterattack on Union finance minister Nirmala Sitharaman for her statements over and allocations to Telangana in her recent Union Budget, saying that the people of Telangana have given more than double to the Centre than what it gave to the state.

In a tweet, the state minister said that the nation needed to know what Telangana gives to the Centre and what it gets in return. In a tweet, KTR said "Pained by the condescension in the statement of FM in Parliament that Centre has Given" TS funds.

People of Telangana & the nation need to know what Telangana Gives to Government of India in the form of taxes & what we get in return- Hope the irony is not lost on you FM ji (sic).

The differences between the Telangana state and Centre at a government level, and between the ruling TRS and BJP parties at a political level, over funds released by the centre to state have been persistent and continued for years.

The TRS and Telangana's argument has been that the Centre gave to Telangana on par with other states as per Constitutional obligations and no additional funds were ever allocated to the state. The BJP says that the Centre has been giving more funds to Telangana, which the TRS-led government was diverting and misusing.

To a question posed by Congress MP Komatireddy Venkata Reddy in the recently concluded Lok Sabha session over funds released to Telangana by the Centre, Union finance minister Nirmala Sitharaman had given a written statement.

Former MP and deputy-chairman of the Telangana Planning Board B. Vinod Kumar immediately criticised the Centre on this issue. This led to a flurry of allegations and counter-allegations by TRS and BJP leaders on the issue, with minister Rama Rao now joining the fray in countering the Union finance minister.