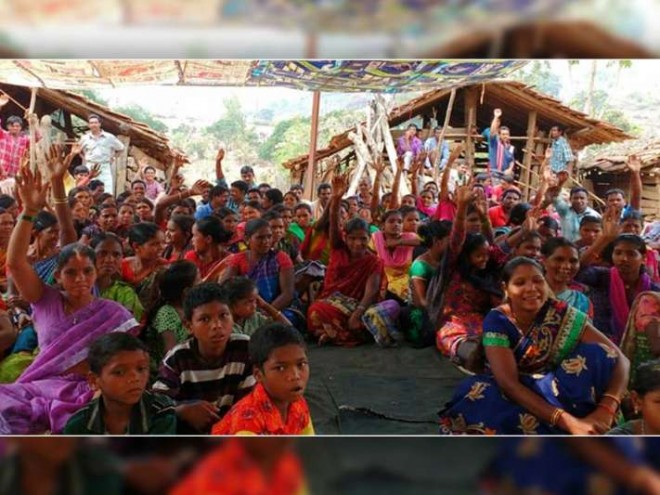 Adivasis of the Visakha agency have set their mind on demanding a separate state if their constitutional rights were not restored in total within a fortnight. A congregation of close to one lakh tribals from 11 mandals of Visakhapatnam district, north Andhra and Godavari districts assembled at the Paderu junior college grounds on Wednesday to air their demands.

The Adivasis, since mid of December last year, have been agitating against exploitation by non-adivasis, who own and run nearly all of the businesses in agency areas since the last four decades. They revived their agitation after one of the traders filed a petition in the High Court to withdraw all rights, including 1/70, which prohibits land transfer to non-tribals.

The meeting, 'Adivasis Atma Gaurva Sabha' (tribal self-respect meet), was organised by the Joint Action Committee of all Adivasi unions and mass organisations to create awareness amongst Adivasis to mobilise for a showdown.

Rama Rao Dora, convener, JAC, said that an action plan was being finalised on Thursday and an ultimatum would be served to the state government to fulfil the 15-point charter of demands within a fortnight.

Important demands include cancellation of voter ID card, ration card, trade licenses and appointment of non-tribals in government posts. Mr Dora said that the government has been encouraging non-adivasis by announcing ZTPCs and MPTCs seats for local elections, which was against the Constitution. Demanding a ban on tourism, he said sex trade was being organised in a big way in the name of tourism.

"If the government fails to respond, we should be prepared for a showdown," he told the gathering.

Representatives from various organisations, including teachers from Andhra University, exhorted up the adivasis to fight for their rights. Chanda Eliah, one such vocal supporter of protests, said that adivasis had to vote for YSRCP as they had no alternative. He suggested that the movement should be apolitical and against the government only because it was encouraging settlers.

E.A.S. Sarma, retired civil servant, stressed on the importance of gram sabhas, which were incorporated in the PESA and Fifth Schedule. He said that the Adivasis should vote for those political parties whose manifesto matched their charter of demands.