KCR's decision over CAA; Justified his statement too!! 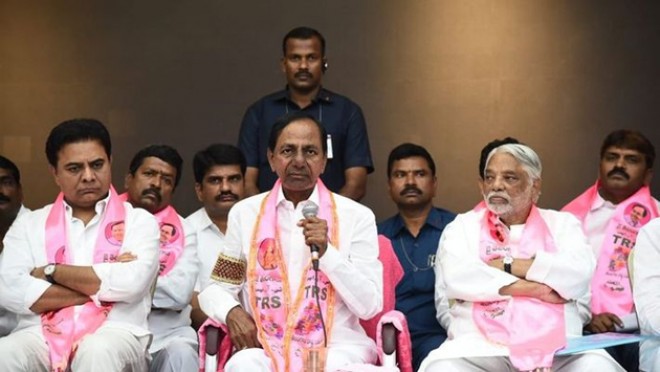 Intriguing to Prime Minister Narendra Modi to rethink on the Citizenship Amendment Act (CAA), Chief Minister KCR on Saturday came down heavily on the NDA government for bringing such a legislation in the first place.

Addressing a press conference at Pragathi Bhavan after the TRS landslide victory in the urban local body elections, he said that the CAA was not at all good for the country and that it is 100 percent a faulty and bad Act.

He felt that the Supreme Court must take suo motu cognisance of the CAA and quash this draconian law to protect the integrity of the country.

Replying to the Congress which had questioned his silence on the CAA, NPR and NRC, he said: I am in touch with Chief Ministers of other states that are opposed to the CAA, and leaders of like-minded parties. If necessary, I will take the lead and invite all of them for a meeting in Hyderabad to chalk out a course of action to fight against this regressive legislation. We will fight against it. We are not scared of anyone or any party.

Announcing that the TRS will pass a resolution against the CAA in the Budget Session of the Assembly, KCR said it was a matter of concern that the CAA left out a particular religion from its ambit and was therefore discriminatory.

KCR said that the implementation of the CAA will put the stamp of religious stigma on the democratic nation which has stood strong as a secular country. The CAA will certainly destabilise the secular fabric of this country. Maintaining that the TRS was a secular party which believed in the Constitutional proclamation of not discriminating anyone on the basis of religion, caste or creed, he made it clear that the TRS will remain a secular party and not lose its secular credentials just for the sake of votes or temporary political gains.

Chief Minister K. Chandrasekhar Rao announced that the TRS will hold a huge public meeting in Hyderabad against the CAA with 10 lakh people.

Replying a question with regard to Chief Minister's conclave against the CAA in Hyderabad, he said it was not against any person or individual but for the sake of the nation's integrity. He said that there was no clarity on the CAA since various Union ministers were speaking in different tones and were self-contradictory.

Asked whether he would work with the Congress on the issue of the CAA, he said that for the sake of the future of the country he was prepared to work with it. The country is drowning under the people's movements against the CAA and with meaningless acts of the BJP government at the Centre with regard to the economic slowdown.

Stating that he was pained when he heard of Muslims left out of the CAA, Mr Rao said India had the largest Muslim population and pointedly asked if they were not citizens of the country.

He said, the BJP's lathi rule will not sustain for long. In a democratic country the elected governments have to review their decision when there is opposition on any of the decisions. But the BJP government has adopted an adamant attitude, which not good for the country. The CAA is also not good for the future of Indians living abroad.

KCR said that India is a Union of States and the state governments are not merely executive bodies, they have Constitutional powers and obligations and they have every right to oppose or support the actions of the Union government.

CM KCR said that the Federal Front, an idea he has previously floated, will come to power in the 2024 elections with a coalition of the regional parties as the people have lost confidence in the BJP and the Congress.