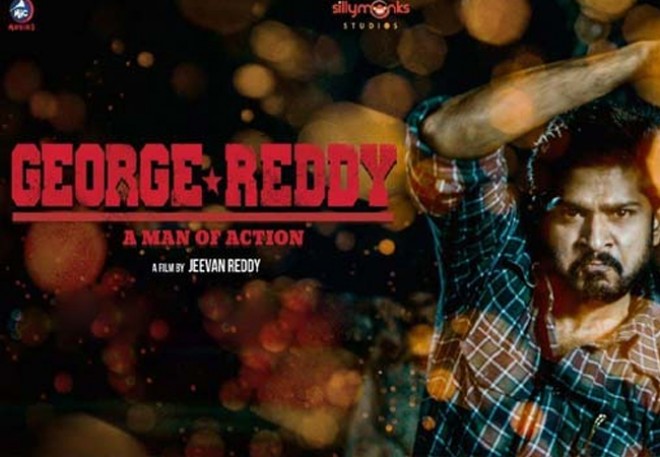 George Reddy is a film that has generated a good buzz from the last few days. The film has special premieres one day before its release and here is the detailed review of the film.

The story is based on the real-life of Goerge Reddy who was one of the revolutionary student leaders at Osmania University. George(Sandy) joins Osmania University and very soon starts raising his voice against the various problems on the campus. within no time, he becomes famous and this does not go well with the rival gangs and they plan and kill him. How all this happens is the crux of the story.

One of the first things that impress you in the film is the entire set up. The makers need to be appreciated for re-creating the whole era in a magnificent manner. The costumes, camerawork, and production design are top-notch.

The film starts off well with Sandy being introduced as George Reddy. The fights in the film need a special mention as they have been composed supremely well. The blade fight and the manner in which the thrills are designed is superb.

Sandy gets into the skin of George Reddy and gives his best. The first half has mostly college politics and they have been dealt well. But more clarity on the college issues could have made things even effective.

The second half slows down a bit as there is not much motive in the film and the proceedings are quite predictable. Technically, the film is brilliant as the music and BGM are top-notch.

The camera work is also good. Dialogues are decent. The film has just a few highs and goes on a simple note by not generating that great thrill or bad experience.

On the whole, George Reddy is a film that does not live up to all the great hype. That does not mean that the film is bad. The bygone era has bee re-created well and the performances are top-notch. The youth will like it as the fights and mass elements are good. But the second half is dull and has nothing going it's way and ends the film on a dull note. So go with lesser expectations and watch the film with an open mind.