As CM I have not killed innocent people as Modi did 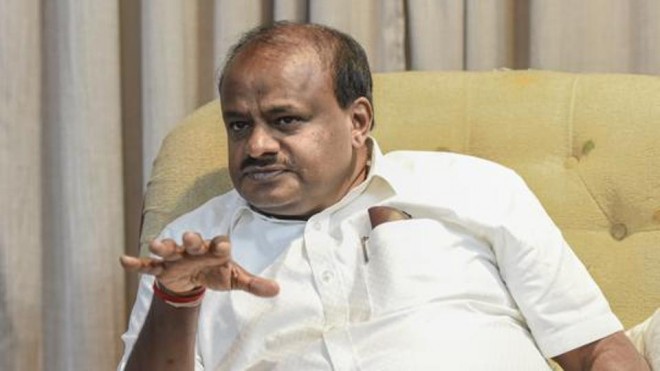 Bengaluru, Apr 14: "As the Chief Minister I have not killed innocent people as Prime Minister Narendra Modi did when he was the chief minister," said HD Kumaraswamy here on Sunday.

"I don't need to learn from PM Modi. As a CM, I have not taken the lives of innocent people, as he did," Chief Minister Kumaraswamy told media persons here after paying tribute to Bharat Ratna Dr Bhimrao Ambedkar on his 128th birth anniversary.

Referring to the recent Income Tax (I-T) raids in the state, Kumaraswamy said: "I am not afraid of such raids. Even when JDS president HD Deve Gowda went to someone’s house for dinner, his house was raided. What kind of government is this," he asked.

Kumaraswamy's comments come days after I-T Department seized Rs 1.66 crore in cash during raids conducted across the state. On March 28, a total of 24 premises were searched by I-T Department.

Former Prime Minister HD Deve Gowda had said that raids were acts of political vendetta as the BJP wanted Kumaraswamy to form the government with their (BJP) support but he refused.

Karnataka will go to polls during the second and third phases of Lok Sabha polling on April 18 and April 23 respectively. The counting of votes will take place on May 23.