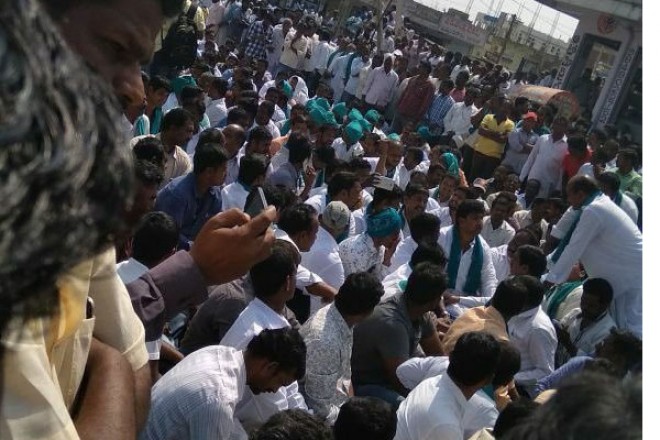 Nizamabad, Apr 09: Over 175 farmers, who are contesting the election in Nizamabad Lok Sabha constituency of Telangana, on Tuesday held a joint election rally, calling upon the farming community to reject the parties not accepting their long-pending demands.

On the last day of campaign, the contesting candidates came together to hold the rally under the banner of 'Rythu Ikya Vedika', slamming the state and Central governments for their failure to address the farmers' issues.

Speakers from different farmer groups urged the farmers to vote for those contesting from their own community to teach a lesson to the parties which have failed to fulfil their promises.

A total of 185 candidates including 178 farmers are in fray for April 11 election. The entry of farmers has created problems for main contestants.

The constituency has a little over 15.53 lakh voters including 3.73 lakh farmers.

Turmeric and red sorghum growers from various parts of the constituency attended the meeting and passed resolutions. It sought Minimum Support Price of (MSP) Rs 12,000 per quintal for turmeric and Rs 3,500 for red sorghum.

The meeting demanded immediate steps to set up Turmeric Board in Nizamabad, which accounts for the bulk of turmeric production in the country.

They also demanded reopening of two sugar factories in Nizamabad, implementation of Swaminathan Committee recommendations and withdrawal of cases booked against farmers.

The speakers urged farmers to become a part of the movement to fight for their rights. It was decided that the farmers will also contest the local body elections in future.

Kisan Khet Congress state president Anwesh Reddy recalled that Kavitha had told the farmers that if Turmeric Board was not set up and if the MSP for turmeric was not increased she would not seek the votes again. "She is now saying the issue does not come under her purview," he said

He also criticised the BJP for not responding to their demands. The farmers also found fault with the statement of Kavitha's brother and TRS working President K.T. Rama Rao that there is a political party behind the farmers.

The Election Commission has already decided to use Electronic Voting Machines (EVMs) for conducting the polling. The constituency is set to create a record as 12 EVMs will be used in each polling station.

Some of the contesting farmers had approached the Telangana High Court, seeking postponement of polls on the ground that they were yet to get the election symbols and they needed time to popularise them among voters.

The high court on Monday refused to postpone the election but agreed to hear the farmers' plea to declare the action of the Election Commission in not allotting symbols in time as illegal. The court adjourned the hearing by two weeks.