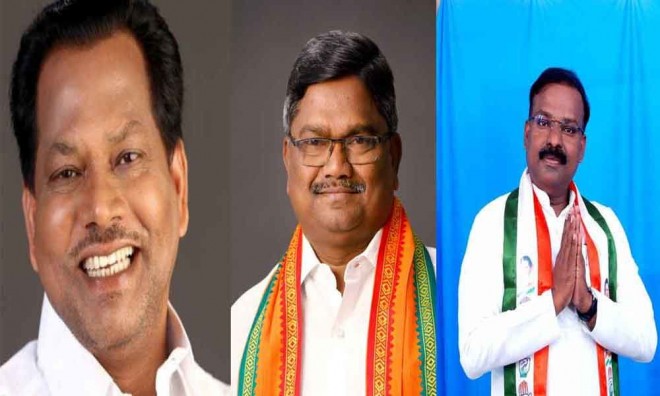 Peddapalle, Apr 09: A tough fight is likely to be witnessed between three major political parties, the Congress (Dr. A. Chandrashekar), BJP (S. Kumar) and TRS (B. Venkatesh Netha) in the LS elections with the candidates of the respective parties taking part in a vigorous poll campaign in all the seven Assembly constituencies that fall under Peddpalle Parliament segment.

Out of seven, TRS won five Assembly seats - Koppula Eshwar from Dharmapuri, D. Manohar Reddy from Peddapalli, Bulka Suman from Chennur, D. Chennaiah from Bellampalli and N. Diwakar Rao from Mancherial whereas the Congress has one only seat D. Sridhar Babu from Manthini.

From Ramagundam, Korukanti Chandra Patel won on the All India Forward Bloc ticket but later shifted his loyalty by joining the ruling TRS. In the 2014 Lok Sabha elections, Bulka Suman from the TRS won with a large majority of 2,17,521 votes defeating Congress candidate G Vivek.

From the time of the announcement of their candidature, all the candidates of the three major political parties intensified their poll campaign and have left no stone unturned to emerge victorious from the Peddapalli Parliament segment.

"People across Telangana know me very well as I participated for more than 12 years in the separate Telangana movement and apart from that I resigned my minister's post for the cause. I am receiving a very good response from all sections of people from the seven Assembly segments and I am sure that I am going to win this election with a big majority."

Chandrashekar said that he had a clear vision on what steps had to be taken for exempting the income tax on the salaries of coal mine workers. He said that if he was elected, he would meet all the MPs of 11 states where the coal mines were present and would exert pressure on the government for exempting the income tax of coal workers along with providing all the basic facilities in all government schools that fell under Peddapalli parliament segment from MPLADS.

The Congress is determined about empowerment of women and will sanction about `6,000 per month for them. It is like an unconditional job for them, he said.

Moreover, it was the Congress which gave separate Statehood of Telangana. "People have already made up their mind. They gave the TRS two chances and now have decided to vote for the Congress," he added.

The BJP-nominated Peddapalli LS candidate, S. Kumar, who was upbeat with the success of the meeting that was held on Sunday in which Uttar Pradesh Chief Minister Yogi Adityanath attended.

Speaking to this newspaper, he said that being a local candidate, born in Godavarikani, he had full knowledge about Peddapalli and issues the people were facing here because of which he was receiving huge response from the public, he added.

Kumar informed that right from his childhood, he has been observing the problems of the Singareni workers. Many who were born here were not getting jobs and had migrated to other areas and were living in miserable conditions.

The previous government including the present TRS did not concentrate on foolproof development of the segment even though it had plenty of resources like water, forest and land and did not establish industries.

Many youth sacrificed their lives for achieving separate statehood of Telangana but the TRS government betrayed them after coming to power. It had not recruited a single teacher post till date.

"The youth, educated and intellectuals taught a befitting lesson to TRS party in the recently held MLC elections and the same will be repeated in coming up LS elections," he warned.