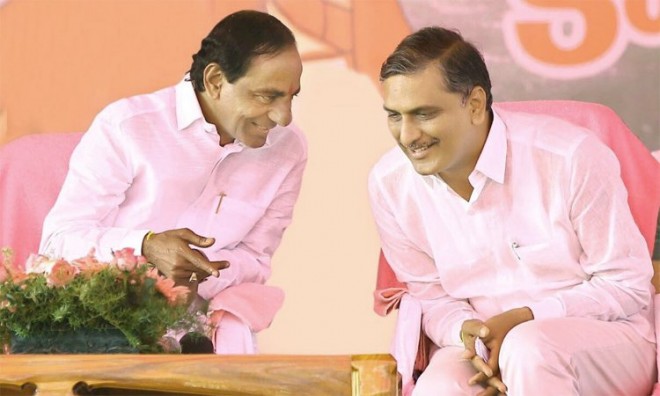 Hyderabad, Mar 28: It's not even two days since the TRS has submitted its list of 'star campaigners' for Lok Sabha polls to the Election Commission.

The list has 20 names of star campaigners but shockingly party's senior MLA and mass leader T Harish Rao's name was missing from the list. The TRS has now submitted an updated list to EC including Harish's name in the list of star campaigners for Lok Sabha polls.

After winning in TS Assembly polls for the second term in December last and after his son KTR was elevated to TRS working president post, everyone knows how TRS chief and CM KCR has been consciously overlooking and evading Harish Rao in the party.

Everyone in political and party circles believes that this was done for the sake of KTR as KCR wants his son to have complete control over the party and the government.

But the recent political development backfired forcing TRS to look at party's Mr. Fixit to save the party from the present dilemma. The TRS has been facing rough weather politically when Lok Sabha polls are just two weeks away.

TRS lost MLC polls on Tuesday and on the other hand CM's daughter Kavitha is sneaking at the defeat in Nizamabad Lok Sabha seat with turmeric and red jowar farmers revolting against TRS and KCR and filing over 200 nominations to contest against Kavitha.

In these circumstances, KCR reportedly felt that no one in the party except Harish have the capability to flood away party from the present trouble.

Harish was immediately included in the star campaigners list and he was asked to visit Nizamabad to resolve the issues and also tour other constituencies to boost TRS prospects. Harish's matter again proved that no one can crack down on a worthy leader (or) a worthy talent all the time.