Congress sets back in Telangana council 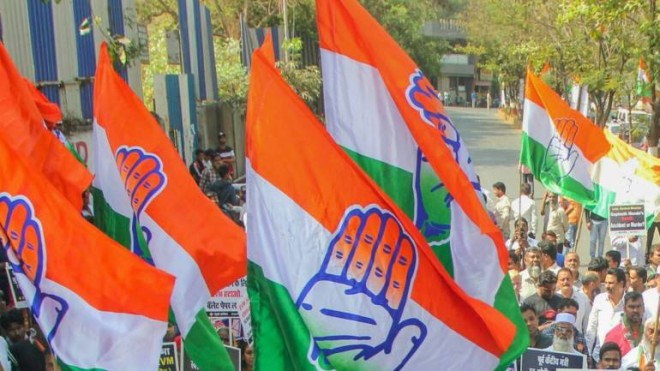 Hyderabad, Mar 27: The resonant victory of former minister T Jeevan Reddy and two other candidates in the MLC elections in Telangana has given a huge blameless boost to Congress party in the state.

For the party which has been down in the dumps following its defeat in the assembly elections and subsequent large scale defection of its MLAs into the ruling Telangana Rashtra Samithi, the results came as a big relief.

The Congress managed to stage a comeback into the legislative council with the victory of Jeevan Reddy from Karimnagar-Adilabad-Nizamabad-Medak graduates constituency.

The party has almost lost its presence in the council as the term of two MLCs – Mohd Shabbir Ali and Ponguleti Sudhakar Reddy will come to an end by March 30.

The party fielded a candidate in the MLC elections under MLAs' quota – Gudur Narayan Reddy, but had to boycott the polls, following defection of its MLAs into the TRS. The TRS-MIM grabbed all the five seats.

But now, for the TRS, following the victory in assembly elections and the opposition's lowering spirits, the latest results were a big setback. All the three candidates supported by the TRS, including two sitting MLCs, lost the elections, held on March 22.

Jeevan Reddy defeated his nearest rival Mamindla Chandrashekhar Goud, supported by the TRS, by a big margin of 39,430 votes.

Another candidate K Raghotham Reddy of Progressive Recognised Teachers' Union (PRTU), supported by the Congress, won Karimnagar-Adilabad-Nizamabad-Medak teachers constituency by defeating B Mohan Reddy by a margin of 1707 votes. Sitting MLC Paturi Sudhakar Reddy, who had been the TRS chief whip in the legislative council, stood in the fourth position.

Similarly, TRS leader and sitting MLC Pula Ravinder was also defeated in the MLC elections in Nalgonda-Khammam-Warangal teachers constituency in the hands of Narsi Reddy, who contested on behalf of United Teachers' Federation (UTF), a CPI (M) outfit, but was supported by the Congress and the CPI, a margin of nearly 3,000 votes.