Will KCR hand over the power to KTR? 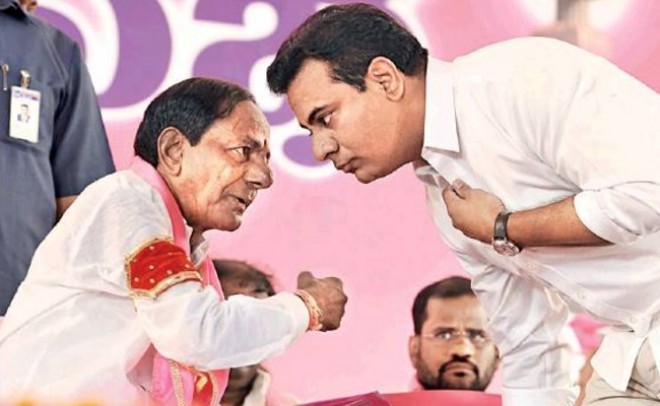 Uphold by the massive victory in the recent Assembly elections and confident of a clean sweep in the next month's Lok Sabha polls in the state, the Telangana Rashtra Samithi (TRS) hopes to play a pivotal role in formation of next government at the Centre.

Ever since he floated the idea of Federal Front as an alternative to both the Bharatiya Janata Party (BJP) and the Congress a year ago, KCR never tried to hide his prime ministerial ambitions, saying he will not shy away from discharging his responsibility.

TRS leaders expect the regional parties will win 100-120 seats and as the leader of this new formation, KCR, shift to the national capital to play his role.

Going by the way he groomed his son K. T. Rama Rao over the last five years, it left nobody in doubt that KCR will hand over the mantle to him. After the TRS retained power with the landslide victory, KCR made Rama Rao the Working President of party so that he can focus on the national politics.

There have been other indications as well. KCR, who took over the as the Chief Minister for a second term on December 13, 2018, has not inducted KTR into his cabinet. He has also not allocated key portfolios, including finance, industry, information technology and urban development.

Political analysts say this could be aimed at giving free hand to KTR in pick his team as and when he takes over.
KTR, however, on many occasions has dismissed the talk of his taking over as the Chief Minister. He always remarked that KCR is fit enough to serve the state for another three terms.

Ever since TRS formed first government in India's youngest state in 2014, KTR had emerged as the number two both in the government and the party and came to be seen as KCR's heir-apparent.

Suave, soft-spoken and dynamic, KTR hogged the limelight at most of the events as KCR virtually shunned public appearances, focussing on post-bifurcation, governance and party-related issues.

As minister for information technology, industry and urban development, the US-educated leader with IT background developed good rapport with the IT honchos and industrialists and played a key role in attracting the global investments to the state.

Effectively using social media platforms, KTR connected well with the people, especially the young. A good orator in Telugu, English, Urdu and Hindi, he has inherited many capabilities of his father.

KTR also emerged stronger by leading the party to a massive victory in the Greater Hyderabad Municipal Corporation (GHMC) elections in 2016. He also led the party's campaign in and around the state capital in the Assembly elections held in December and helped the party win a majority in the Assembly.

KTR gave TRS a headstart in the campaigning for Lok Sabha by urging people to elect all 16 candidates of TRS, leaving Hyderabad seat for the party's ally Majlis-e-Ittehadul Muslimeen (MIM).

He is also said to be playing a key role in attracting MLAs from main opposition Congress party. The Congress party has targeted him for allegedly engineering defections. As many as nine Congress MLAs have defected to TRS this month, dealing a huge blow to the party ahead of April 11 elections.

KCR's daughter K. Kavitha is also a leader in TRS but she has had a limited role in the party. She was elected from Nizamabad Lok Sabha seat in 2014. Though the party is yet to announce the list of candidates, Kavitha is among five sitting MPs who were asked by KCR to start campaigning in their respective constituencies.

TRS leaders say it is obvious that KTR, the only son KCR, will take over as and when the latter moves to Delhi.