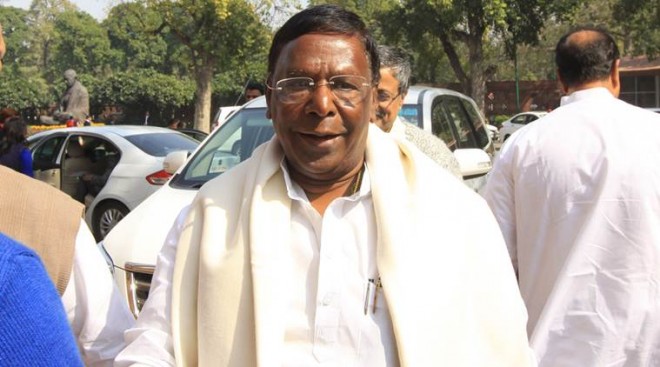 Puducherry, Mar 12: The Puducherry unit of the All India Anna Dravida Munnetra Kazhagam (AIADMK) accused Puducherry Chief Minister V Narayanasamy of violating the model code of conduct by extending giveaway to the public in form of pre-dated cheques from Chief Minister's relief fund.

In a letter to the Chief Election Commissioner, AIADMK's whip in Puducherry Vaiyapuri Manikandan alleged that Narayanasamy had been disbursing cash payments from Chief Minister's relief fund to his own party members.

"The Chief Minister had been disbursing cash payments to from Chief Minister's relief fund to his own party members. The payments were issued in the form of pre-dated cheques to the public of patronising INC party in selected areas of Puducherry region with instruction to realize the cheques immediately," Manikandan wrote in his letter to CEC.

He further alleged that the banks have been instructed not to bounce the cheques. "The Bank authorities release payments as and when the account is refilled. So the pending payment will be released from the banks soon after the receipt of funds without catching the eyes of anybody," he wrote.

Manikandan conceded that no one can accuse the CM of violating the MCC directly at the moment. "The money transfer is taking place in a phased manner even after MCC is implemented," he said in his letter.

He also urged the Election Commission to intervene and stop the fund share transferred from the Chief Minister's relief fund until the completion of Lok Sabha elections.

"Since these activities are not visible to the eyes but the activities of the CM are misappropriating funds of the exchequer and violating the MCC. Therefore, I urge the EC to intervene and stop the fund share transferred from the Chief Minister's relief fund, until the completion of Lok Sabha election in Puducherry," Manikandan said in his letter.

Election Commission of India (ECI) on Sunday announced the schedule for the 17th Lok Sabha election, which will be held in seven phases beginning April 11. The final phase of voting will take place on May 19, while counting of votes will take place on May 23. Puducherry will go to polls on April 18 in a single phase.