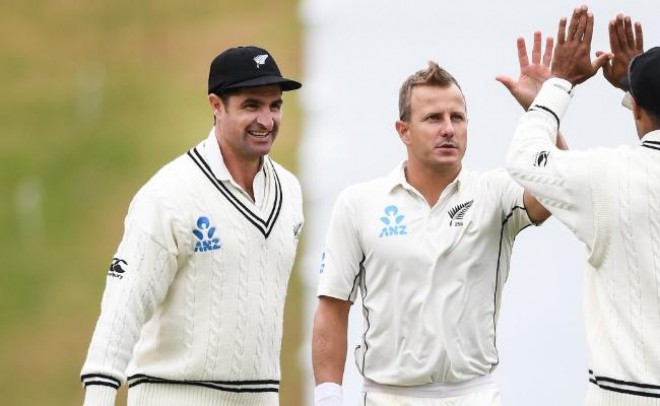 Wellington, Mar 12: New Zealand thrashed Bangladesh in the second test to seal the series. The hosts won the match by the massive margin of an inning and twelve runs.

New Zealand wrapped up the victory in the rain-affected match at the Basin Reserve shortly before lunch on the fifth day on Tuesday to clinch the three-match series with a game to spare.

Bangladesh, who had needed 221 runs to make New Zealand bat again, were bowled out for 209 as the umpires extended the first session by 15 minutes as a result was likely.

Neil Wagner finished with figures of 5-45.

The final Test starts on Saturday in Christchurch, although New Zealand coach Gary Stead said they would be cautious with Williamson, who is likely to be replaced by the uncapped Will Young.

"Kane is obviously keen to play this final game, but we will look to take a safety-first approach, particularly with the World Cup on the horizon," Stead said.

"Will has been in our Test squad as batting cover for the past two series and he should be confident following some strong performances domestically and for New Zealand A."

Stead added that it is too early to determine whether wicketkeeper BJ Watling would be fit for the third Test after he did not appear on the fifth day in Wellington having suffered a hamstring strain in the warm-ups.

"BJ has a minor left hamstring strain and we felt it was best he didn't keep today to give him the best chance of being fit for the third Test."

The victory was New Zealand's fifth Test series win in succession and all the more remarkable with the entire first two days of play washed out, while an hour's play was also lost at the end of the third day due to rain and poor light.

Captain Mahmudullah provided the only real resistance for the visitors with a counter-attacking 67, while Mohammad Mithun scored a patient 47 and had held off New Zealand's bowlers late on the fourth day.