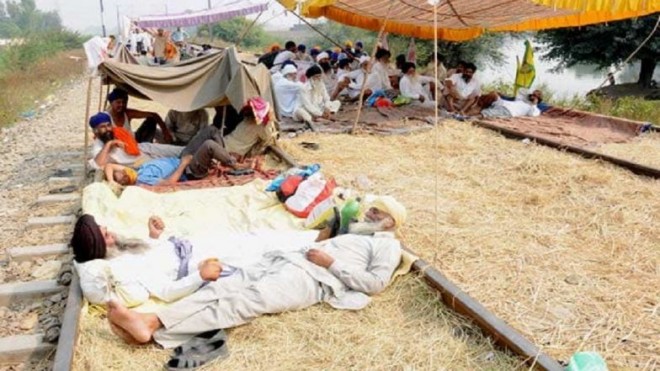 Amritsar, Mar 06: The farmers who have been squatting on the Amritsar-Delhi rail track for the past two days lifted their blockade on Wednesday. The farmers called off their agitation following the intervention of the Punjab and Haryana High Court, police said.

A petition seeking the removal of the farmers protesting on the Amritsar-Delhi rail track was filed in the court on Tuesday, with the HC issuing notices to Punjab, Centre and leaders of farmers' outfit Kisan Mazdoor Sangharsh Committee to appear before it on Wednesday.

Senior Superintendent of Police Parmpal Singh said the agitation was called off after leaders of the protesting farmers gave an assurance to the court in this regard.

Farmers under the banner of Kissan Mazdoor Sangrash Committee had been squatting on the Amritsar-Delhi rail track in Amritsar in support of their demands, including full loan waiver, implementation of Swaminathan Commission report, stopping auction of land and arrest of farmers and payment of sugarcane crop with 15 per cent interest. The agitation has led to the cancellation of 38 trains and diversion of 11 trains, officials said.