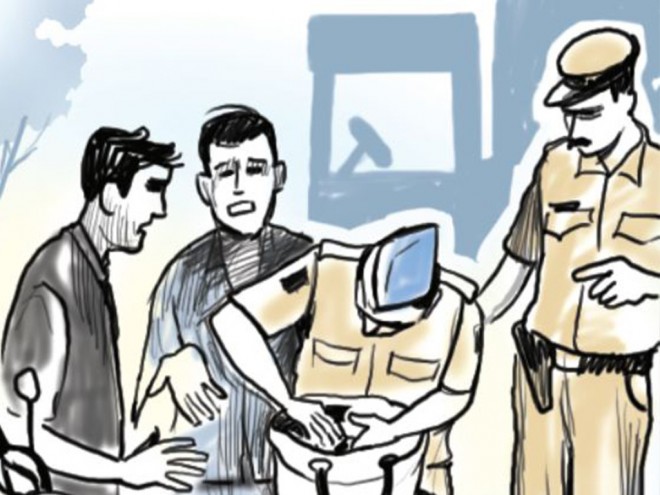 Chittoor police on Tuesday nabbed an eight-member inter-State rice-pulling gang at Gudupalle-Kamasandra road near Kuppam, and seized Rs. 1.29 crore in cash besides two SUVs, a motorcycle, and a trunk.

Naveen Kumar, a merchant from Tirupattur in Tamil Nadu, had lodged a complaint against the accused with the Gudupalle police last month, claiming that he was cheated of Rs. 2.10 crore by the gang who had promised to give him a 'rice-pulling vessel'.

On Tuesday (February 11), the special party obtained reliable information that the gang members were on the move at Gudupalle (Kuppam rural) Karnataka border, carrying huge cash. Around 1.30 p.m., the special party intercepted two SUVs and a motorcycle at a culvert near Gudupalle and nabbed all the eight accused. Police seized Rs. 1.29 crore in cash from their possession.

The seized cash included Rs. 75 lakh which the accused had allegedly wrapped in a polythene bag and buried in a pit near a hotel at Gudupalle while attempting to evade a police patrolling team a few weeks ago.

The accused were identified as Mahadeva and Sivakumar of Kamasandra town, S. Gangadhar of Chikballapur, Dhanasekhar of Srirampur in Bengaluru Rural, Ramachandra Naidu and Sekhar of Krishnagiri district, S. Vinayagam of Kanchipuram, and Seenappa of Gudupalle in Chittoor district all aged between 19 and 43.

The accused were constantly travelling between the villages near Kuppam junction, luring gullible villagers and merchants with the 'rice-pulling vessels'.