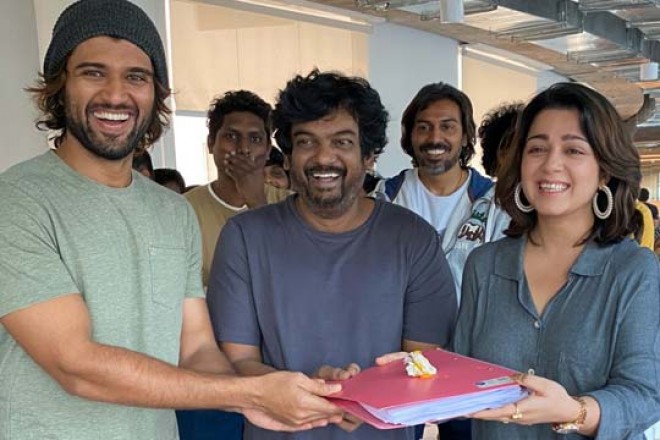 Mass director Puri Jagannadh and Rowdy Vijay Deverakonda have officially begun shooting for their new film Fighter. The film was launched today in Mumbai, with Charmmee doing the first clap in.

Fighter is being produced by Puri Jagannadh, Charmme Kaur, Apoorva Mehta, and Karan Johar. This will mark the first time that Karan Johar is producing a film in Telugu. This film is set to release in Hindi and all the South Indian Languages. Vijay Deverakonda has learned mixed martial arts and other fight forms for this role in Thailand.

The heroine for this film has not been finalized yet. Previously, it was announced that Sridevi's daughter Janhvi Kapoor would be the female lead in the film. However, the actress has stepped down from the film for unknown reasons. Other actors in the movie include Ramya Krishnan and Bollywood actor Ronit Roy.

Vijay's look seems to have not changed in the film. From the launch video, it looks like the actor is going to maintain the same look as in World Famous Lover, which will become routine. Does this mean that this film will showcase the actor in a similar style? If that happens, then this film will offer the same things as Arjun Reddy and Dear Comrade.