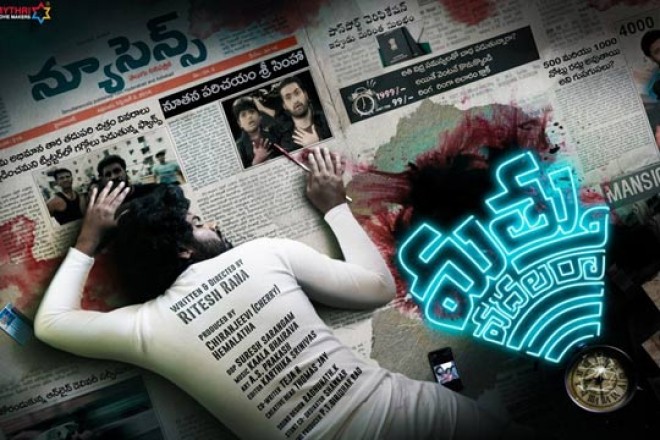 Mathu Vadalara is a film that has been promoted a lot in the last few days as it has Keeravani's son making their debuts as hero and music director respectively. The film was released today and let's see how it is.

Babu Mohan(Sri Simha) is a poor delivery boy who lives with his friends. After seeing a lot of poverty, he decides to cheat his customers by taking cash on delivery in a very clever manner. He makes a perfect plan and goes to a flat. But in a crazy turn of events, a lady gets killed and Babu gets stuck in the crime scene. He comes back and takes his friends to the apartment to destroy the evidence. The rest of the story is as to how the friends face problems and come out as innocents.

The film has a wafer-thin storyline but the director Ritesh Rana makes full use of his talent and narrates the film in a gripping manner most of the time. The suspense has been carried quite well in the first half. If this was not enough, the comedy created by Satya is just amazing. He is the lifeline of the film and does an amazing job. The manner in which he evokes comedy through his dialogues evokes huge laughs in the theaters.

The first half of the film is established well and the suspense is nicely generated for the audience. The camera work is also good and Vennela Kishore gets a good role and he does well in the film. The manner in which a TV serial is shown to contradict what is going on in the film is very good.

Ritesh Rana makes an impressive debut as he has a good talent which is seen through his narration of the subject. The second half also starts well but as the suspense is revealed the film feels a bit dragged as the director takes forever to end the film. The twists showcased are also good for the most part but it is the comedy that takes the cake in this thriller which will be liked by a section of the audience.

The film has amazing sound design and BGM which keeps the viewers entertained. Kaala Bhairava's use of minimalist music in key areas is very good. The camerawork is stunning and so was the production design. The oneliners written for Satya were also very good. The makers have chosen good locations and logics showcased also work well in the film.

Second half
Routine twists in the climax

On the whole, Mathu Vadalara is a suspense comedy that has a very interesting premise. The narration is gripping for the most part and comedian Satya's one-man show keeps the audience entertained. However, the second half goes down a bit and once the suspense is revealed, the film gets dragged. But the film has a different setup and will please its target audience and ends as a decent time pass watch this weekend.