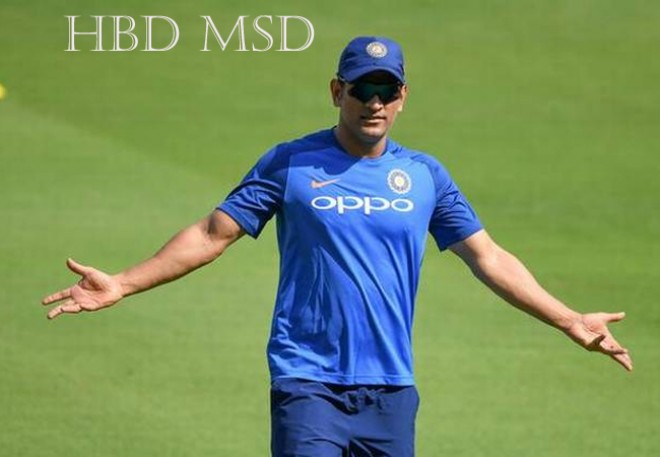 Former Indian cricket captain and current wicketkeeper Mahendra Singh Dhoni is celebrating his 38th birthday today. It was on this day that he was born in Ranchi in 1981. Dhoni is the most important and important contributor to Indian cricket and world cricket history. Let's know today, some of the highlights of his birthday...

Dhoni is an Indian cricketer who has been the biggest income tax payer in the state of Jharkhand for the last two years and is also one of the leading people in the country.

The second largest brand ambassador is also Dhoni only and he is currently advertising 20 big brands. This includes reebok, Pepsi products, etc.

- Dhoni has also been named in the list of the highest-paid cricketers in the world, as the richest cricketer in 2012 by Forbes magazine.

- Even Dhoni's tremendous fan of a bike, SUV and dogs. According to information, Dhoni has 23 bikes. This includes from Harley Davidson to Ducati.

- Dhoni is married to his childhood friend Sakshi. Both used to teach at davi school in Ranchi. After a two-year affair, he took seven trips in 2010 after an engagement at a friend's farm house in Dehradun.

- In the world of cricket, Dhoni's shot is quite famous, called a helicopter shot. They strike the ball falling near the foot differently, turning their bats around like the chopper's wings.

- Dhoni was part of Bihar's Under-19 cricket team in 1998 and his team lost against Punjab, but his performance was appreciated and based on that he was inducted into the Bihar Ranji team. In the meantime, he also got a job as a ticket collector in the Railways and was posted at Kharagpur railway station. He worked for the family from 2001 to 2003 to help.