Modi attacks the alliance of opposition in K'taka 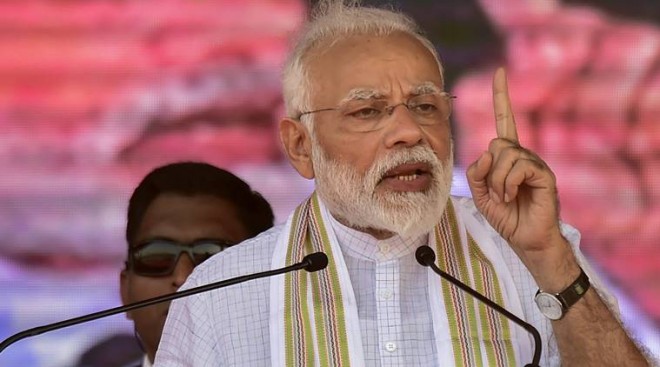 Lashing out at Congress-JD(S) alliance in Karnataka, Modi said the two parties came together for the sake of the power.

"Do you want a government whose remote control is in the hands of a dozen people", asked Modi attacking alliance of opposition parties.

Earlier PM Modi was addressing a poll rally in Maharashtra’s Latur, on Tuesday said that BJP government has ensured that terrorists are identified and killed, even if we have to enter other countries to do so.

"To kill terrorists right in their dens is policy of New India," he said.

Attacking Opposition, PM Modi said, "Congress is responsible for creation of Pakistan. Congress’s manifesto and Pakistan speak same language on Kashmir related issues. Had pre-Independence Congress leaders acted wisely, 'this Pakistan' would not have been created."

Taking a dig at Pakistan, Modi said first they came in media and said they had two pilots in their captivity but by evening they said they only had one pilot.

"Even a child would know what happen to the second pilot," he added.

Slamming Congress-NCP alliance for backing separate PM for Jammu and Kashmir, Modi said, "The country has no expectations with Congress party but Sharad sahab you! Does it suit you?”

Referring to Balakot air strike which took place in the wake of Pulwama attack, Modi said that people should dedicate their first vote to those who carried out air strike.

"We didn't talk of air strike in manifesto, but carried it out when warranted," PM Modi added. ''They say chowkidar chor hai; but from whom are note bundles seized," Modi targets Congress.

Modi also hailed the manifesto of the BJP, released in Delhi Monday, and said the party was committed to national security and farmers' welfare among other.

"Your trust is my biggest accomplishment in last five years," Modi told the crowd. He also said his objective is to rid India of naxal and Maoist menace.