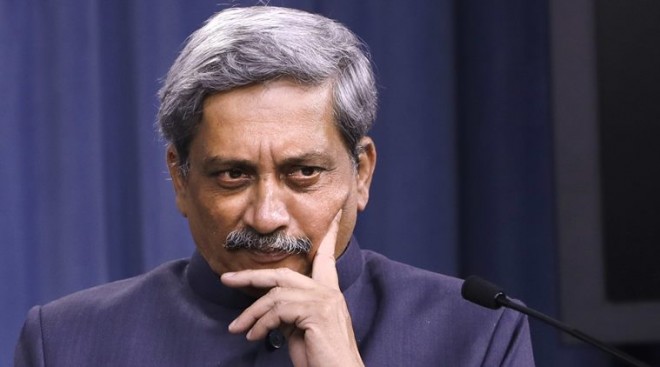 New Delhi, Mar 18: Goa chief minister Manohar Parrikar passed away at his residence in Panaji on Sunday evening after a prolonged illness. He was 63. The Centre has announced national mourning on Monday to mark his death.

Parrikar's health had worsened over the past two days and turned critical late Saturday night. when he was put on life support. His medical condition had fluctuated for over a year. The four-term chief minister and former defence minister was flown to the United States for treatment of his pancreatic cancer in March last year.

"The chief minister died around 6.40 pm on Sunday," a state government official said in Panaji. A widower, he is survived by his two sons and their families.

Parrikar will be accorded state funeral. The national flag will be flown at half-mast in New Delhi and the capitals of all states and Union territories on Monday. The Union Cabinet will hold a special meeting at 10 am on Monday to pay tribute.

"Shri Manohar Parrikar was an unparalleled leader. A true patriot and exceptional administrator, he was admired by all. His impeccable service to the nation will be remembered by generations. Deeply saddened by his demise. Condolences to his family and supporters. Shanti," the PM said in a tweet.

Prime Minister Narendra Modi said when Parrikar was the defence minister, India witnessed a series of decisions that enhanced the country’s security capacities, boosted indigenous defence production and bettered the lives of ex-servicemen.

With Parrikar's demise, the BJP-led coalition in Goa has to search for a new leader to replace him. He was heading a coalition government comprising the BJP, Goa Forward Party, MGP and Independents.

His death will also necessitate the fourth byelection in Goa, where bypolls are due for the Shiroda, Mandrem and Mapusa Assembly seats on April 23. These will be held in the state along with the Lok Sabha polls.

The Congress is the single largest party in Goa, with 14 MLAs, while the BJP has 13 in the 40-member Assembly. The Goa Forward Party, MGP and Independents have three MLAs each, while the NCP has one.

The strength of the House has been cut to 36 due to the demise of BJP MLA Francis D’Souza earlier this year, and Parrikar on Sunday, and the resignation of Congress MLAs, Subhash Shirodkar and Dayanand Sopte, last year. After the news of Parrikar's death broke, the coalition partners have called emergency meetings.