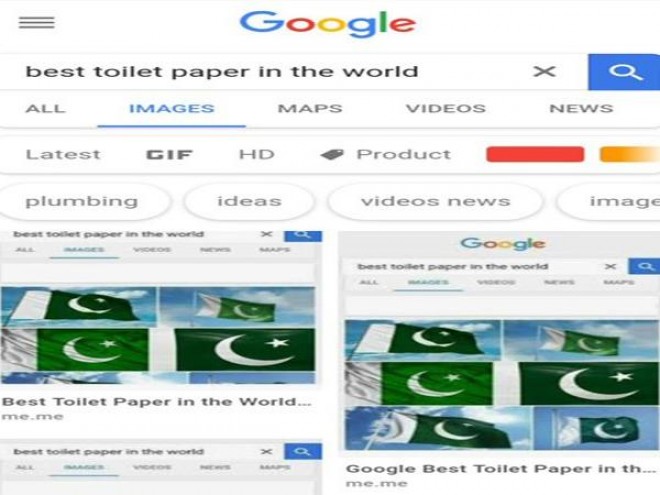 New Delhi, Feb 18: When searched for 'Best Toilet Paper' Google is showing the flag of Pakistan and this has gone viral with the screenshots of this being posted by peoples on Twitter, Facebook, and Instagram.

Apart from images of the Pakistan flags, a search for toilet paper-related queries on Google results into a number of media reports that have been circulating around the subject.

A query to Google about whether the glitch has been taken care of or not went unanswered. Google Search algorithms have often displayed inappropriate search results on certain topics. Earlier, searching words like “Feku”, “Pappu” and “Idiot” led users to images of Indian Prime Minister Narendra Modi, Congress President Rahul Gandhi and US President Donald Trump, respectively.

The glitch on Google Search results was noticed a couple of days after the February 14 terror attack in Jammu and Kashmir’s Pulwama district that left 49 Central Reserve Police Force (CRPF) personnel dead. The bus was part of a convoy of 78 vehicles carrying CRPF personnel from Jammu to Srinagar. Terror group Jaish-e-Mohammed (JeM) has claimed the responsibility for the Pulwama terror attack. Adil Ahmed Dar, the top suspect, was identified as a local of Kakapora in Pulwama district.

Unsurprisingly, the terror attack drew criticism from various quarters and countries. A day after the Pulwama terror attack, India also withdrew “Most Favoured Nation” or MFN status accorded to Pakistan.